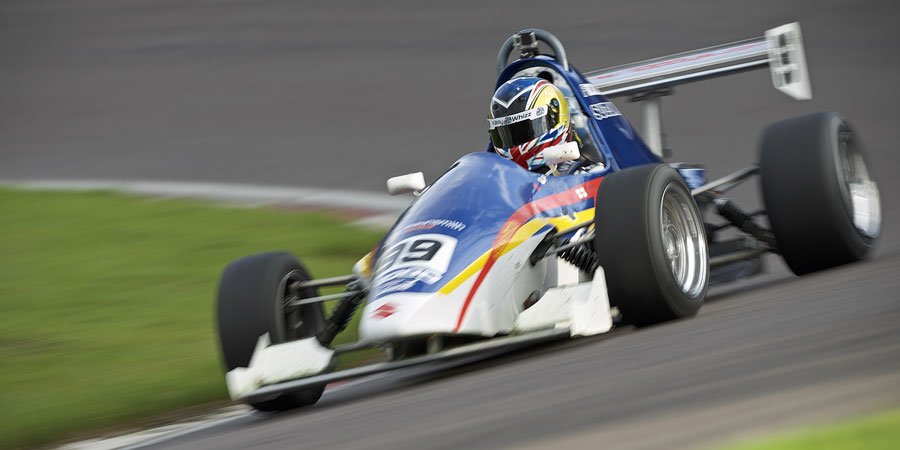 Michael Watton did exactly what he needed to do in the opening race of the weekend at Oulton Park to secure the 2017 F1000 title, however the second and last race of the season didn’t quite go as planned for the newly crowned champion.

Watton clinched the 2017 honours in style with another win in Race 1, his pace impressive enough to overhaul the deficit of a ten second penalty for a jump start infringement. Behind the winner Dan Clowes and outgoing champ Rob Sayell were in a race long battle which resulted in them finishing second and third respectively, and with a gap of just under half a second. Just outside the podium positions, Paul Butcher took fourth place and second in the overall championship, with Adam Walker finishing in fifth ahead of Dan Levy. Levy came into the weekend as a returnee to the championship after several seasons away and had a credible run to sixth.

On the opening lap of the reversed grid Race 2, Watton and Butcher’s weekends took a down turn as contact between the pair put Watton out of the running, and Butcher to the back of the field. This however didn’t detract from the action at the front as Clowes and Sayell again went head to head; and with both on equal points this was the race for third in the championship. Although on this occasion Sayell had the race lead and the advantage over Clowes, and it was an advantage that the leader would not give up’ despite Clowes’s efforts. Sayell won and took third place in the title race, but only by just over a tenth of a second. After taking huge pressure from Stu Abbott, which ended up in contact, Walker limped home to take third place and his first podium finish in twelve seasons of racing. With Abbott side lined Levy improved on this race 1 result by crossing the line in fourth ahead of the recovering Butcher. Newcomer to the F1000 Championship, Rob Bailey, had a great run to a solid top six finish.

Two Sonic Tool’s Driver of the meeting awards were presented at Oulton Park. Adam Walker took his second of the year by achieving his first podium finishing position in twelve seasons of racing, whilst Newcomer Rob Bailey was recognised for his overall improvement over the weekend in what was his very first race meeting!

The Sonic Tool’s Technician of the meeting award was presented to Michael Watton’s father, Mark, for the preparation work on what is now the Championship winning car.

With several newcomers attending the race meeting: Dan Levy, Rob Bailey and Ben Mcgee, a bonus award was presented for the highest place finisher. Levy was the recipient.