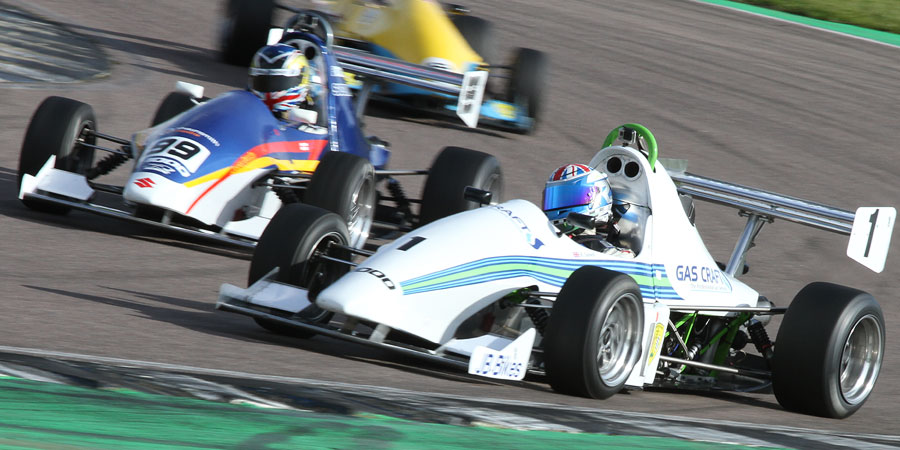 Michael Watton took a step closer to the 2017 F1000 title at the latest race meeting at Rockingham, but was outscored over the course of the weekend by reigning champion Rob Sayell.

Watton was in dominant form taking pole by a margin of just under 1.7 seconds and won the first race comfortably, despite falling to third after the start behind title rivals Paul Butcher and Sayell. After hitting the front early on Watton, was seemingly unchallenged and won by a healthy 8 seconds. Meanwhile Butcher and Sayell battled it out for the remaining podium places, with the latter coming out on top to take second ahead of Butcher. Dan Clowes was next to finish in fourth position ahead of Dax Ward, fifth.

Watton again took the chequered flag at the end of race 2 further extending his championship lead, this time ahead of Butcher who on this occasion got the better of Sayell but by only half a second! Clowes again finished fourth just under a second behind the podium finishers, with Stu Abbott taking fifth, a recovery after a race 1 DNF due to an engine misfire.

Going into race 3 Watton was on the brink of being crowned champion, but would again have to win the race to make it official, however after again looking dominant over the opening laps the championship leader began to drop back down the order with a clutch issue. Sayell took the advantage at the front of the pack and began to build a slender lead ahead of Clowes and Butcher, which he maintained to the end to take his first win of the season. Clowes and Butcher finished second and third barely separated by three tenths of a second. After driving well all weekend Adam Walker put in another strong drive resulting in fourth place, his best of the season so far. Emulating his race 2 finish, Abbott again took fifth.

After outscoring Watton by one point over the course of the three races, Sayell picked up the Rockingham Circuit Champion trophy for 2017.

Adam Walker was named the Damar/Sonic Tools driver of the meeting after producing consistently strong drives and taking his best finishing position so far this season.

Doug Lague, who helps run his father Peter, was recognised for how well their race car is presented and was presented with the Damar International/Sonic Tools Technician Award.

Looking towards the last race meeting of the season at Oulton Park, Watton still appears to be favourite for championship honours but he will have plenty of competition!

You are here: Home > News > Watton edges closer to F1000 title at Rockingham