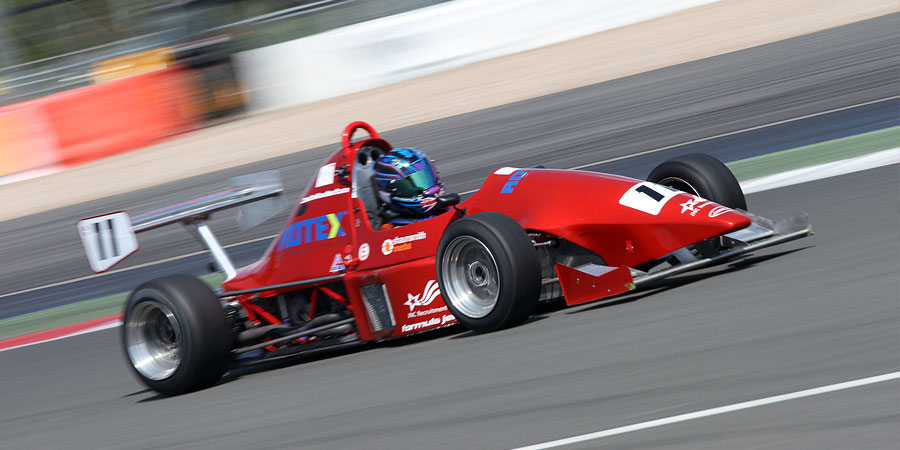 Although Anderton was on pole, it was Paul Butcher who took the lead at the start of race 1 as the pole sitter gave chase along with Dan Clowes, Stu Abbott and Kris Prosser. After the opening few laps Butcher held the lead as the front five were nose to tail with Abbott moving into third when he put a move over Clowes, who by mid distance returned the favour by getting the place back. While the battle at the front continued, the top five remained unchanged as the race progressed, although Prosser was just losing his grip on the leading group and slightly falling back.

Despite being under pressure Butcher seemed to be controlling the race well and looked like he had done enough going into the final lap, however Anderton looked visibly closer and on the last corner jumped ahead to take his first Formula Jedi race win, only just under four tenths of a second ahead of Butcher. Clowes was able to stay ahead of Abbott as the pair finished third and fourth respectively, showing just how close the racing was as the top four were separated by just two and a half seconds! Prosser didn’t give up chasing the leading pack but had to settle for fifth comfortably in front of sixth place finisher Jason Dixon.

Anderton again started from pole in Race 2 but a bogged start dropped him to fourth going into the first corner as Clowes took the lead ahead of Abbott and Butcher. Looking like a repeat of race 1 the top four started to pull away from the rest while fighting for positions, Anderton being the biggest mover as he got himself up into second by the end of lap three. Further down the field contact between Prosser and Bradley Hobday left the former in the gravel trap and the latter with suspension damage resulting in an ill handling car.

Back at the front, the top four all held station until lap 14 when Anderton dispatched Clowes to take the lead of the race, a lap later Butcher also passed Abbott to put himself into a podium finishing position. In the closing laps of the race Anderton managed to pull out a gap at the front that could not be recovered and he took his second race win of the weekend, ahead of Clowes, and Butcher who took the final step of the podium. Abbott fell back during the last few laps but was unthreatened and took fourth place. After contact with Prosser in the early stages of the race, Hobday managed to secure fifth, with Dixon putting in a solid drive to take another sixth place.