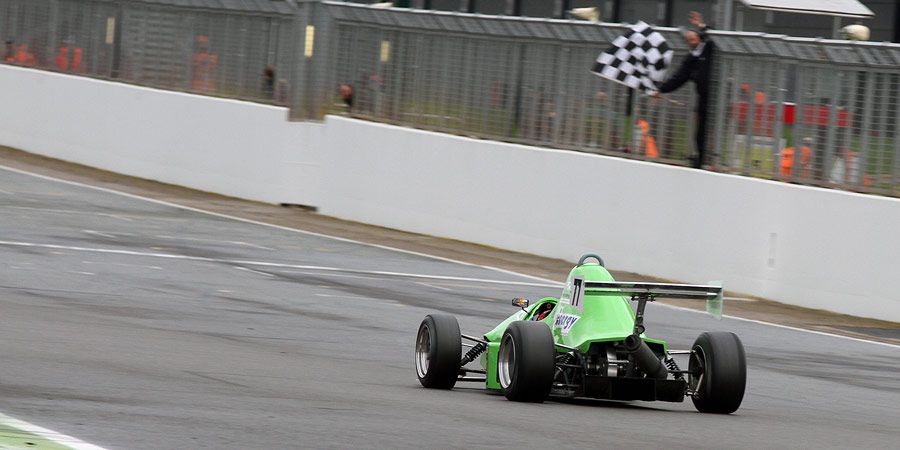 However, by the end of the lap Hingely was in front, as Morgan – who was also recovering after a bad start – was muscling his way through, taking second on lap 2, and hoping to take the fight to the leader.

What was looking like a straight forward race for the leading pair then got turned on its head as Hingely was handed a 10 second penalty for a jump start. With both drivers aware, all that was needed by Morgan was to stay in touch with the leader to take the win and that's exactly what he did. Hingely took the flag, but Morgan took the race win – his sixth of the season, and also closed the gap in the championship to just a handful of points. A small consolation to the championship leader, Hingely set the fastest lap and a new record.

Rob Sayell had a great race to finish in third and took the final step of the podium – his best race result of the season. Paul Butcher, who had to recover from a mid-race spin which almost resulted in collecting Clowes, climbed back to fourth ahead of Adam Walker who netted his best finish of the season in fifth. Richard Moorcroft put in a solid drive, equalling his best seasons finishing position of sixth.

Having been in the championship battle for most of the season, Michael Watton limped home after engine woes on the final lap to finish seventh. This was enough to secure third in the 2015 standings, finishing off his best season to date.

As the championship fight came down to the final race of the season, all Hingely had to do was finish a place behind Morgan to clinch the title, but the latter was still determined to take the fight into the last race. However as the lights went out, Morgan was cruelly removed from the race with mechanical failure – through no fault of his own, denying both Hingely and Morgan the opportunity for one last race battle of the season. With this, and after passing early leader Butcher, Hingely ran clearly at the front already knowing he had won the 2015 championship and at the flag took his 8th race win of his campaign.

Clowes finished a distant second but set the fastest lap of the race after a race long battle with Butcher who took 3rd. Walker improved on his personal best finish of 2015 with fourth, as David Cooper produced his best finish in 5th. Moorcroft again repeated his Race 1 effort with another 6th place finish.