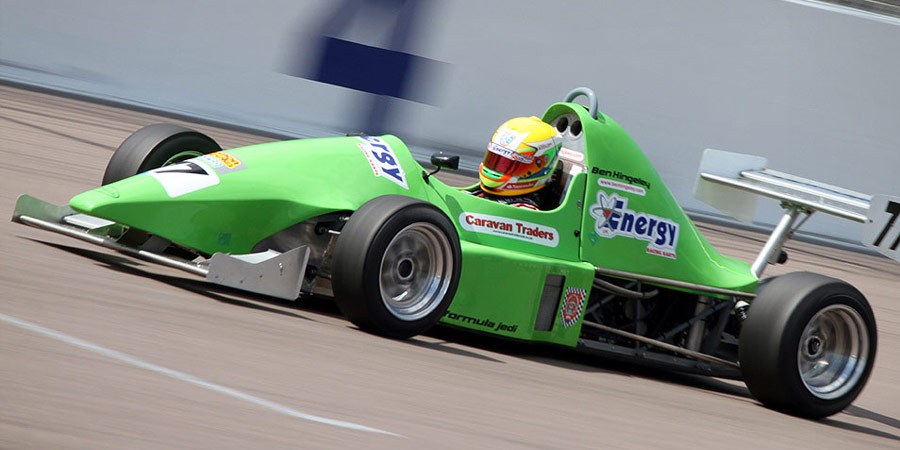 Karting graduate and Formula Jedi rookie, Ben Hingeley, starred during the second weekend's racing of the season at Rockingham by taking two wins from two starts.

Hingeley showed superb pace by qualifying nearly 1.3 seconds clear of the field to take pole position, but it was Paul Butcher who got the better start from second to lead into the first corner ahead of Hingeley, Ryan Harper-Ellam, Rob Sayell, and Lee Morgan. Harper-Ellem and Sayell produced great starts from sixth and eighth respectively. In contrast the championship leader Michael Watton snapped a drive shaft as the lights went out leaving him side lined, while Matt Ryder stalled dropping him way down the order from fourth.

On lap three Hingeley made his move on Butcher and took the lead, and with open road ahead of him started to pull out a gap as the chasing pack fought amongst themselves. As the race progressed Morgan found his way past Harper-Ellam and a few laps later overtook Butcher for second, but by this point could not have an answer to the leader. As the chequered flag dropped, Hingeley took his maiden Formula Jedi win almost 9.5 seconds in front of second placed Morgan. Butcher finished in a solid third place with Harper-Ellam following him home in fourth ahead of Rob Sayell, and Ryder managed a great recovery drive after his disappointing start to take sixth.

Hingeley again sat on pole for race two, but this time Watton had cut his advantage down to a quarter of a second, with Dan Clowes just a further three tenths behind him. A better start kept Hingeley at the front with Butcher squeezing in between him and Watton to take second as the field went into the first corner. As the leaders came around, Hingeley had built up a gap of just over a second, however progress was halted as the safety car was deployed to recover Zach Anderton after he spun out of the race.

The race went green again on lap four and Hingeley started to try and produce another gap over his rivals while Watton started to size up Butcher for a move which was made a couple of laps later. Now in second Watton gave chase to try and stay on terms with the leader, but just couldn't do quite enough as Hingeley again took the race win with a three and a half second's advantage.

After a race long battle, and both also getting the better of Butcher, Clowes and Morgan were next to finish, only a second separating them - Morgan scoring enough points over the weekend to take the championship lead. Butcher almost slipped further down the order but managed to hold on to fifth as Harper-Ellam got within a quarter of a second when the pair crossed the finish line.

You are here: Home > News > Great Pace and Victory Double for Rookie Hingeley