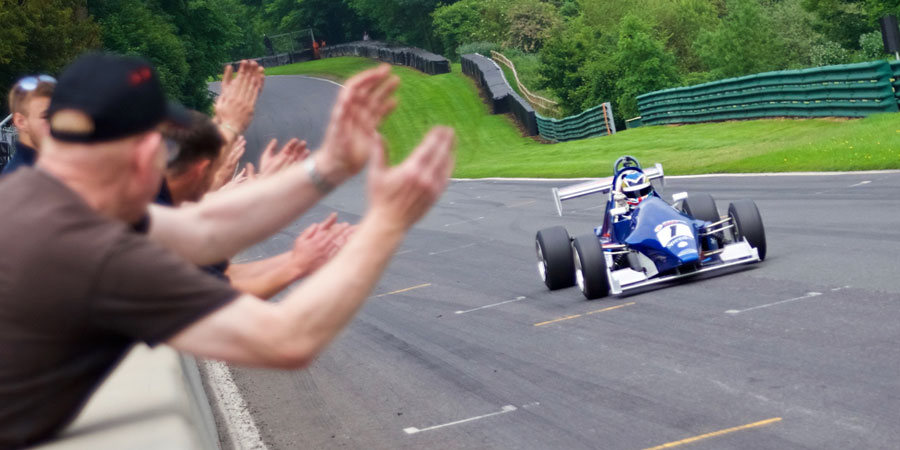 Watton back to winning ways at Cadwell Park

Michael Watton got back to winning ways at Cadwell Park taking both race victories over the weekend and putting himself back into the championship lead.

In Race 1 Watton achieved a dominant win after taking pole in qualifying and was never troubled as he finished over eight seconds ahead of his nearest rival, Paul Butcher. Butcher, in turn, also had a fairly untroubled run to second ahead of Dan Clowes, who took to the last step of the podium. Alok Iyengar and Adam Walker had the closest race in the first encounter finishing in fourth and fifth respectively, but only just over half a second apart. Experienced sports car racer Alastair Boulton completed the top six in his first single seater race, however he would feature more heavily in the second.

The top three finishing order was the same for Race 2, but this time they had to work a little harder for it. Although the oldest driver on the grid, Peter Lague showed he had plenty of fighting spirit as he lead the opening lap of the race after starting from pole as the top eight were reversed. However Boulton got through on lap 2 and solidly held his place at the front of the field for the first half of the race until Watton got past at mid distance. Butcher put himself into second a few laps later as Boulton still looked strong enough for a maiden podium position in his debut weekend in the championship. As the last laps went by Boulton did his best to hold onto third only to be ousted by Clowes on the very last lap of the race, but proving his potential if future outings arise! Iyengar had another consistent run to fifth with Walker completing the top six.

Due to his race performances over the weekend Boulton was named the Sonic Equipment Driver of the Meeting, with Watton taking the Circuit Champion award.

Newcomer Al Rhodes took the IZone Novice Award - coming back to racing after twenty years away. Rhodes couldn’t test due to work commitments so had to go straight into qualifying, no mean feat at Cadwell, but had a solid weekend taking a 9th and an 8th place finish.

Rob Bailey sustained serious car damage after becoming one with the scenery late on in Friday testing so the Jedi Race Team mechanics were presented with the Sonic Equipment Technician of the Meeting award for repairing Bailey’s car, and getting him out on track.

You are here: Home > News > Watton back to winning ways at Cadwell Park