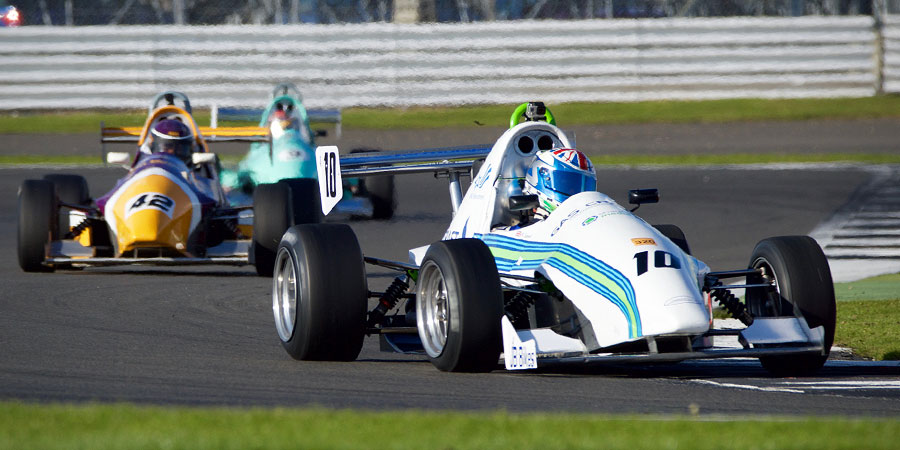 Butcher seemed to have the upper hand going into Race 1 by taking pole position, however Sayell laid down his intentions early on in the race by passing his rival after only a handful of laps. Butcher held on and gave chase, holding the gap to Sayell at around 1 second for much of the race, but just couldn’t get close enough to launch any kind of attack. As back markers came into play in the closing stages, Sayell’s lead increased and at the flag he took the race win by just over two seconds from Butcher, moving himself to within touching distance of the Championship. Behind the leading pair, Hobday finished third with Bryony King taking a well earned season’s best finish of fourth place. Hobday’s third place finish effectively ruled him out of the challenge for overall honours, with his main focus now being able to battle Clowes for third in the points, who in turn was also now out of the running for the Championship after engine gremlins caused him to pull out of the race. Alok Iyengar had a strong drive to finish fifth ahead of Adam Walker who again had a solid drive to sixth place.

With only a fourth place finish required in Race 2 to win the Championship, Sayell was still on the offensive having taken pole in terrible conditions during qualifying: He was in the right place by being the last driver over the line as track conditions started to improve, coming out on top of what was a great qualifying battle between himself, Butcher, Clowes, Hobday, Lee Morgan and Kris Prosser.

At the start Sayell got away cleanly and started to pull away at the front ahead of Butcher and Clowes, however the chasing pair were under threat from Morgan, who was going to make the most of the last race of the season after having to miss the first race due to a family commitment. Morgan moved into second by lap 4 and started to chip away at the lead. As the race developed a fantastic four-way battle for third place took place between Butcher, Clowes, Hobday and Prosser which looked like going all the way to the finish. An ecstatic Sayell crossed the line and did everything he needed to do to take the 2016 Formula Jedi title, a great effort from both the driver and his family run team. However, he was denied the race win as Morgan caught and passed the newly crowned champion with six laps to go. The final place on the podium went to Clowes as he finished ahead of Butcher, Hobday and Prosser.

With his fourth place finish, Butcher took the runner up spot in the 2016 standings. Hobday eventually took third in the Championship, a great result in his first year of circuit racing.

The Formula Jedi Championship has continued to produce some excellent racing throughout the 2016 season and has proven to be a platform where team-run drivers and privateer self-run drivers can compete on an equal footing. Congratulations to all the teams and drivers involved!

You are here: Home > News > Rob Sayell is the 2016 Formula Jedi Champion